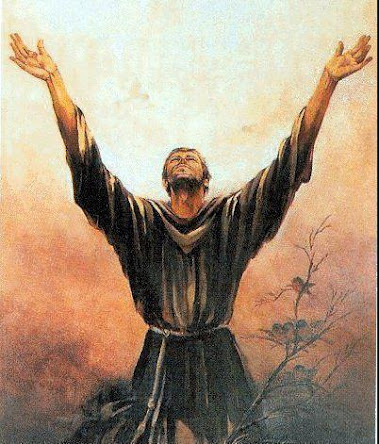 Before Francis preached sermons to the people they met, in passing through towns and castles he exhorted all men and women to fear God and to do penance for their sins, while brother Giles exhorted them to believe and to follow the excellent counsels of Francis.

When people heard them, they said: "Who are these men, and who do they speak like this?" They made this comment because at that time the fear and love of God had died out in the country and no one spoke of penance which indeed was considered a folly. This attitude was caused by the temptations of the flesh, the cupidity of the world, and the pride of life; the whole of mankind seemed engulfed in these evil forces.

Opinions varied about these men who were so obviously set on following the Gospel: some people declared that they were fools or drunk, but others maintained such words were those of folly.
Saint Francis of Assisi
Legend of the Three Companions
CHAPTER IX
T
Posted by Chris Dickson, F.L.A. at 12:39 PM