The love of God has been poured into our hearts through the Spirit of God dwelling within us.

The Dung Of Worthlessness 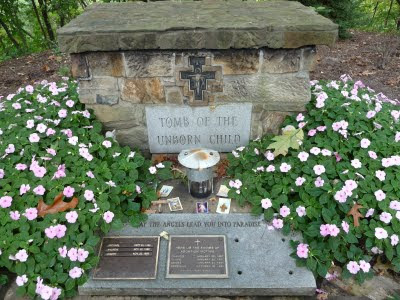 Tomb of the Unborn Child
Franciscan University of Steubenville
Take care lest, when the dung of worthlessness has been placed at your roots, you be found sterile, for then there will remain nothing but that the ax be put to you. Do not trust entirely the spirit that is now in you, for man's senses are more prone to evil than to good, even though it may have been considerably separated from it.Saint Francis of AssisiSacrum Commercium - 54 One time St. Francis was giving a mother and her daughter the comfort of the Word of God. All the while he spoke, he never looked at them, and so when they left, his companion said to him, "Father, that holy woman and her virgin daughter came to you with such devotion; why didn't you look at them? But the holy father answered, "Who would not be afraid to look upon the bride of Christ? A whole sermon was preached with my eyes and face when they looked at me, but not I at them."

Begging For Stones In Ozark, Ohio 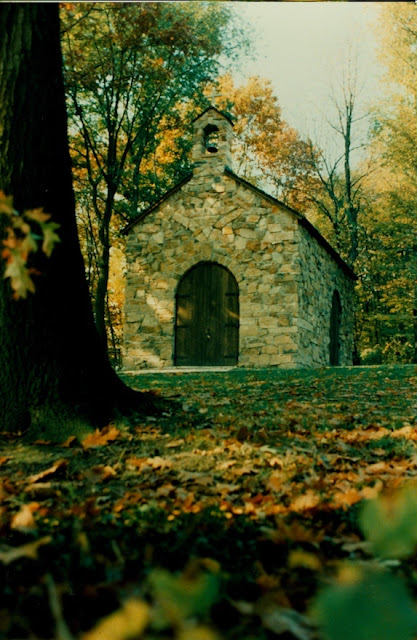 The Portiuncula Franciscan Hermitage and Retreat Center​ spent this past week digging up the old foundations of my Great-Great-Great Grandfather Johnny Burkhard's old Barn, Garage, Chicken Coops, Tobacco House, and my Great-Uncles house foundation to come up with the stones to build our little Adoration Chapel. We still need an additional 100 stones and are asking our Monroe County, Ohio neighbors to drop off any extra cut sand stones they may have lying around their homes onto the property adjacent to the Immaculate Conception Cemetery on Ozark-Eddy Bridge Road ..... 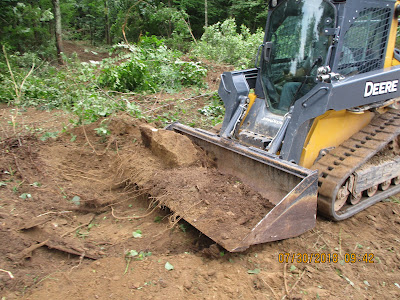 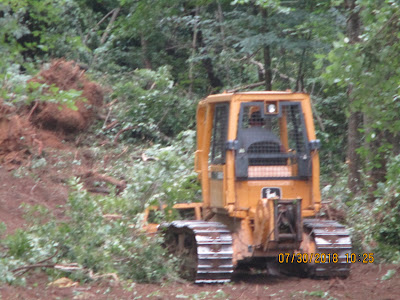 Clearing next to the cemetery to pour the footer. Remnants of the old garage where we found around 20 cut sand stones. 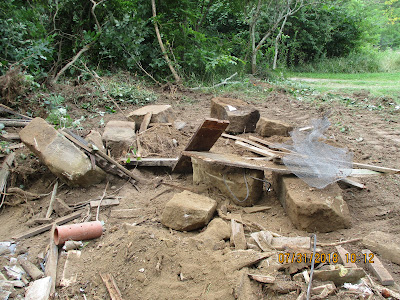 Remnants of the old barn where we found nearly 40 cut sand stones. 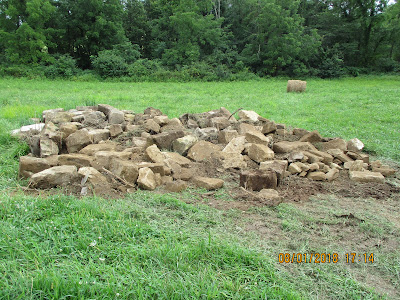 We piled around 200 stones in the field next to the house while we searched for more. 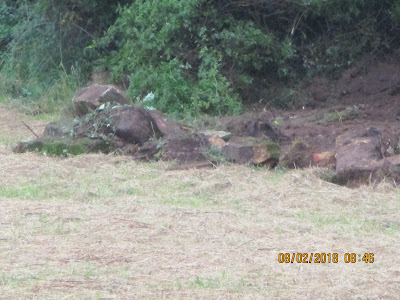 Our biggest surprise was the number of giant cut stones we found in the old Tobacco House! 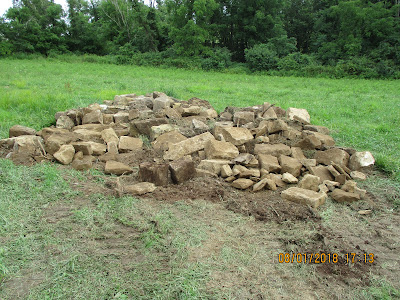 Once again, adding to the pile getting ready to run  them to the building site. 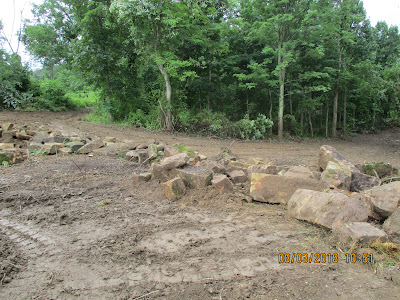 Spreading the stones out so the Stone Mason's can see them all and decide which one's should go where. 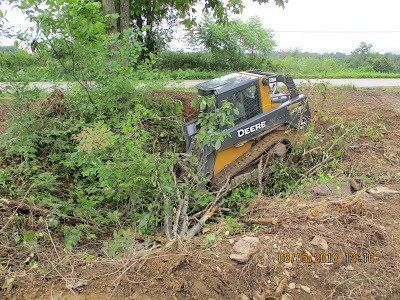 After we realized we were probably around 200 stones short to complete a 20' X 20' chapel, down the bulldozer went into the basement of Uncle Dutch's foundation to dig up all the field stones in the foundation so that we can mix both the cut sand stones and the field stones together to make it look beautiful!

We are begging the good people of Monroe County, Ohio who may have one or two cut stones on their property to please drop them off in the pile of stones next to the Immaculate Conception Cemetery in Ozark, Ohio so that we can complete our project.

Thank you and may God bless you all !!!!

Penitents Should Be Temperate In Eating And Drinking 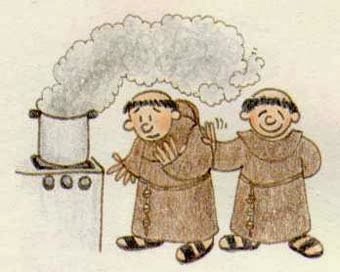 Fra Chris Dickson and Fra Martin Austerman
busily preparing evening chow
"For Penitents, all Mondays, Wednesdays, Fridays, and Saturdays are days of abstinence (that is, meatless days) unless directed otherwise by a physician. Meat is allowed on Tuesdays, Thursdays, and Sundays. At all times, Penitents should be temperate in eating and drinking." 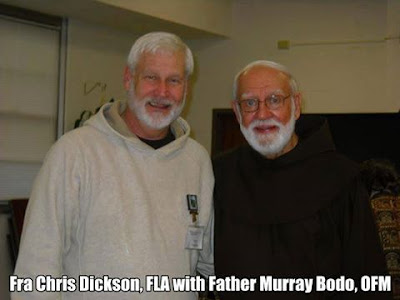 All:  Realizing the importance of saving my immortal soul * and the great value of the Third Order Rule * to achieve this all important goal in life * I hereby resolve to observe this sanctifying Rule * not only in part * but as fully as human frailty will allow.

With God's grade, * I will assist at Holy Mass on weekdays, whenever possible * recite my Seraphic Office faithfully * never omit grace before and after meals * and examine my conscience each night.

I will receive the Sacraments at least once a month * attend the fraternity meetings regularly * and contribute according to my means for the charities of the Order.

I will always carefully observe the Commandments of God and the Church * wear my Scapular and Cord * avoid extravagance in dress and manner of living * avoid dangerous amusements * be temperate in food and drink * set a good example to my family and fellow-man * avoid dangerous reading * be at peace with all * avoid vulgar and improper speech * and practice charity towards all * with special solicitude toward sick and deceased members.

May Saint Francis * so wonderful in penance and love of Jesus Crucified * grant me the necessary spirit of prayer * penance * love and sacrifice * so that I may faithfully observe his rule until death. Amen.

The first recorded reference to the TAU is from Ezekiel 9:4, "Go through the city of Jerusalem and put a TAU on the foreheads of those who grieve and lament over all the detestable things that are done in it." The TAU is the last letter of the Hebrew alphabet and looks very much like the letter "T".
At the Fourth Lateran Council, on November 11, 1215, Pope Innocent made reference to the TAU and quoted the above verse in reference to the profaning of the Holy Places by the Saracens. It is widely accepted that St. Francis was present at the Fourth Lateran Council and that he heard the words of Pope Innocent III when he said, "The TAU has exactly the same form as the Cross on which our Lord was crucified on Calvary, and only those will be marked with this sign and will obtain mercy who have mortified their flesh and conformed their life to that of the Crucified Savior. From then on, the TAU became Francis' own coat of arms.

Francis used the TAU in his writings, painted in on the walls and doors of the places where he stayed, and used it as his only signature on his writings.
St. Bonaventure said, "This TAU symbol had all the veneration and all the devotion of the saint: he spoke of it often in order to recommend it, and he traced it on himself before beginning each of his actions."

Thomas of Celano, another Franciscan historian writes, "Francis preferred the Tau above all other symbols: he utilized it as his only signature for his letters, and he painted the image of it on the walls of all the places in which he stayed."
In the famous blessing of Brother Leo, Francis wrote on parchment, "May the Lord bless you and keep you! May the Lord show His face to you and be merciful to you! May the Lord lift up His countenance upon you and give you peace! God bless you Brother Leo!" Francis sketched a head (of Brother Leo) and then drew the TAU over this portrait.

THE TAU AS OUR FRANCISCAN SYMBOL

Where did the TAU come from and what does it mean? (Rhymes with "How") Simply and basically, the TAU represents the Cross. It is also the last letter of the Hebrew Alphabet. However, the two major influences on Francis concerning the TAU were the Antonians and the Fourth Lateran Council.

St. Francis borrowed the TAU and what it meant to him from the Antonians. They were a religious community of men founded in 1095 whose sole function was to care for lepers. They were disbanded as an Order by the Church in the 1500's because leprosy was no longer a problem and many of the religious orders had fallen into Theological problems. On their habit was painted a great TAU cross. Francis was very familiar with these men because they staffed the leper house in Assisi and the hospital of St. Blase in Rome where Francis went to stay. This is now the church of San Francisco A Ripa.

Every time you see St. Anthony, "the Abbot or Hermit" in art, he is portrayed with the TAU.

St. Francis was exposed to the TAU through the direct influence of the Antonians, but the greatest influence of all that made the TAU so dear to Francis, whereby it became his signature, was the Fourth Lateran Council.

Pope Innocent III opened the Council on November 11, 1215, with these words: "I have desired with great desire to eat this Passover with you." (Luke 22-15.) Innocent announced that for him, for the Church, and for every Catholic at the time, the symbol they were to take as the sign of their Passover was the TAU Cross.

He incorporated into his homily the statement from Ezekiel (9:4) that the elect, the chosen, those who are concerned will be marked with the sign of the TAU. He explained that this Passover is a three-fold Passover.

Every Catholic must be involved in this triple Passover: A Corporal Passover, a Spiritual Passover and an Eternal Passover.

These became some of the most precious themes of Francis' preaching. He must have taken them so deeply to heart that when Pope Innocent III ended his homily with "BE CHAMPIONS OF THE TAU", Francis evidently took that as a personal statement and made the TAU his own symbol: a symbol for his order, his signature, painted it everywhere, and had great devotion to it for the rest of his life.

Quite near the Basicilla of St. Mary of the Angels, on the road to the church of Rivo Torto, is the small, semi-abandoned chapel of La Maddalena (the Magdalen). Here, the lepers worshiped: here St. Francis of Assisi prayed along with them. Here, as we know from the very first sentence of his Last Testament, he found his true vocation: "When I was in sins, the sight of lepers nauseated me beyond measure; but then God himself led me into their company, and I worked mercy with them. Once I got to know them, what had nauseated me became a source of spiritual and physical consolation for me. After that I did not wait long before I left the world."