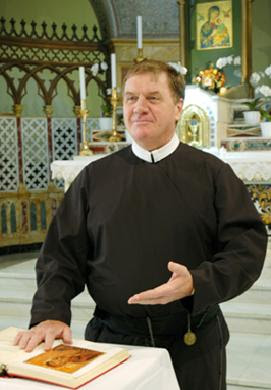 Joseph William Tobin C.Ss.R (3 May 1952 - ) is the current secretary of the Congregation for Institutes of Consecrated Life and Societies of Apostolic Life since his appointment by Pope Benedict XVI on 2 August 2010.[1]

Tobin was born in Wayne County, Detroit, Michigan, in 1952, the oldest of 13 children. At the end of the path of training for the Congregation of the Most Holy Redeemer (Redemptorists), he made his temporary profession of vows on 5 August 1972 and the perpetual vows on 21 August 1976. He was ordained a priest on 1 June 1978.

In 1975. he obtained a Bachelor's degree in philosophy from the Holy Redeemer College, Waterford, Wisconsin in 1977 and, in 1979, a Master's in Religious Education and the Master of Divinity (Pastoral Theology) at the Mount Saint Alphonsus Major Seminary (Esopus, New York).

From 1979 to 1984, Tobin was the parochial vicar of Holy Redeemer Parish in Detroit. He was then named pastor of Holy Redeemer, and served from 1984 to 1990. From 1990 to 1991, he served as pastor of Saint Alphonsus Parish in Chicago, Illinois. He served as an episcopal vicar for the Archdiocese of Detroit from 1980 to 1986; he also offered his collaboration to the local diocesan marriage tribunal.

He was elected General Consultor of the Redemptorist Fathers in 1991 and on 9 September 1997 was elected Superior General, confirmed for another term in this post 26 September 2003. That same year he became Vice-President of the Union of Superiors General.

He was also member of the Council for Relations between the Congregation for Institutes of Consecrated Life and Societies of Apostolic Life and the International Union of Superiors General from 2001 to 2009.
Tobin spent 2010 taking a sabbatical attached to Blackfriars Hall, Oxford, and staying with the De La Salle Brothers. He pursued his interest in the rise of secularisation and secular culture, attending seminars by the sociologist of religion and anthropologist Peter Clarke, studying at the Las Casas Institute and taking classes at Blackfriars.


On 2 August 2010 Tobin was appointed as secretary of the Congregation for Institutes of Consecrated Life and Societies of Apostolic Life and Titular Archbishop of Obba. Tobin is the second US cleric to hold the post. (In 1969, Holy Cross Father Edward Heston, an Ohio native, was named secretary by Pope Paul VI.) In May 2009 Tobin was named to oversee the professed men's element of the forthcoming Apostolic Visitation of the Church in Ireland, which is reportedly slated to get underway come September 2010. He received his episcopal consecration in Rome on 9 October 2010. Tobin was told two weeks before the announcement was made. He recalls that "I was painting my mom's house in Ontario when the phone rang. The voice on the other end said it was Cardinal Bertone, and my first thought was that it was a prank … you know, I thought maybe it was one of the Redemptorists fooling around. Quickly, though, I realized that it really was Bertone, and he said that the Holy Father wants you to do this. My first reaction was to tell him that off the top of my head, I could give him the names of five people much more qualified to do this job than I am. I was completely serious about it. But Cardinal Bertone said no, this is what the Holy Father wants. He said I could take a week to ten days to think about it, so I talked to my superiors, my closest friends in religious life, and my spiritual director".[2]

Tobin said that "But my hope is that the Vatican’s relationship with the local churches can be a sort of creative tension. I think life without tension would be very boring and useless.We can’t walk, we can’t talk, we can’t sing without tension. You need to have tension in your vocal chords and your back, let alone a guitar. However, tension can be destructive. The challenge is to recognise the diversity of gifts and the plurality of churches and the one spirit that unites us. And I think that is the adventure of a lifetime."[3]
Tobin will be responsible for the Apostolic Visitation of American nuns, expected to end in late 2011, and also help oversee the visitation of the Legionaries of Christ that led to Pope Benedict’s recent decision to appoint an Apostolic Delegate for the order, Archbishop Velasio De Paolis.

In December 2010, Tobin said that Rome must acknowledge the "depth of anger and hurt" provoked by a visitation of American nuns, saying it illustrates the need for a "strategy of reconciliation" with women religious. Announced in early 2009, the visitation is currently in "phase three", meaning on-site visits to selected congregations. The aim is for reports to be delivered to the Vatican throughout 2011, marking the formal end of the process.[4]

In October 2012, Tobin was appointed to the Roman Catholic Archdiocese of Indianapolis by Pope Benedict XVI.[5]

How Would Mary Vote?

Monroe County, Ohio Catholics: We Are Begging for Stones 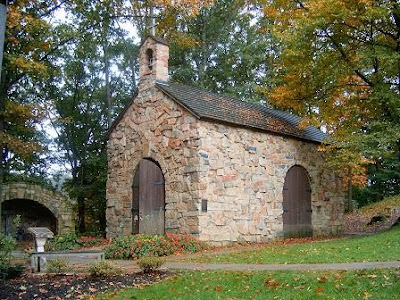 
"Francis set to begging for stones with which to restore the church of San Damiano. He called to the passers-by: 'Whoever gives me one stone will have one reward; two stones, two rewards; three stones, a treble reward!' "

Saint Francis of Assisi
Legend of the Three Companions
CHAPTER VII
Monroe County, Ohio Catholics are being asked to collect all their field stones and drop them off at the Immaculate Conception Catholic Cemetery on Ozark-Eddy Bridge Road (just inside the wood line on the South Side of the Cemetary) so that we can duplicate this Portiuncula Chapel (pictured above) that is located at the Franciscan University of Steubenville. 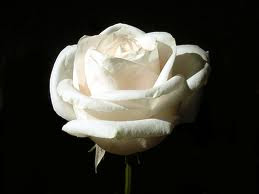 visit the booth at the

The Life Chain will take place on South A Street between 2 and 3 P.M. At 4 P.M. the movie "October Baby" will be shown at Fr. Hillman Hall. This is a PG13 movie.

October is the Month of the Rosary. A Rosary will be prayed before each of the weekend Masses for "Life."

"A Cup of Coffee and a Dose of Conscience" 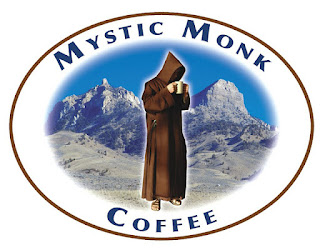 Do faith, politics and caffeine mix? Do our Catholic beliefs have anything to do with how we vote and the laws we support? How do we prevent violations of our First Amendment Rights? Using the teachings of the U.S. Bishops, found in their document, "Forming Consciences for Faithful Citizenship," Indianapolis Archdiocese seminarian, Josh Cole, will guide a polite and engaging conversation.

Enjoy a cup of the

along with juice and rolls. 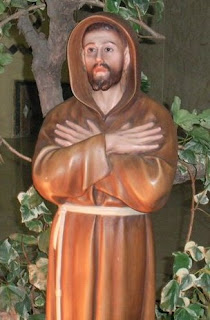 On Oct. 4, Roman Catholics celebrate the feast of St. Francis of Assisi, the Italian deacon who brought renewal to the Church through his decision to follow Jesus' words as literally as possible.

In a January 2010 general audience, Pope Benedict XVI recalled this "giant of holiness" as a "great saint and a joyful man," who taught the Church that "the secret of true happiness" is "to become saints, close to God."
The future Saint Francis was born on an uncertain date in the early 1180s, one of the several children born to the wealthy merchant Pietro Bernardone and his wife Pica. He originally received the name Giovanni (or John), but became known as Francesco (or Francis) by his father's choice.
Unlike many medieval saints, St. Francis was neither studious nor pious in his youth. His father's wealth gave him access to a lively social life among the upper classes, where he was known for his flashy clothes and his readiness to burst into song. Later a patron of peacemakers, he aspired to great military feats in his youth and fought in a war with a rival Italian city-state.
A period of imprisonment during that conflict turned his mind toward more serious thoughts, as did a recurring dream that suggested his true "army" was not of this world. He returned to Assisi due to illness in 1205, and there began consider a life of voluntary poverty.

Three major incidents confirmed Francis in this path. In Assisi, he overcame his fear of disease to kiss the hand of a leper. Afterward, he made a pilgrimage to Rome, where he deposited his money at Saint Peter's tomb and exchanged clothes with a beggar. Soon after he returned home, Francis heard Christ tell him in a vision: "Go, Francis, and repair my house, which as you see is falling into ruin."

Francis began to use his father's wealth to restore churches. This led to a public quarrel in which the cloth-merchant's son removed his clothing and declared that he had no father except God. He regarded himself as the husband of "Lady Poverty," and resolved to serve Christ as "a herald of the Great King."

During the year 1208, the "herald" received the inspiration that would give rise to the Franciscan movement. At Mass one morning, he heard the Gospel reading in which Christ instructed the apostles to go forth without money, shoes, or extra clothing. This way of life soon became a papally-approved rule, which would attract huge number of followers within Francis' own lifetime.

Through his imitation of Christ, Francis also shared in the Lord's sufferings. He miraculously received Christ's wounds, the stigmata, in his own flesh during September of 1224. His health collapsed over the next two years, a "living sacrifice" made during two decades of missionary preaching and penance.