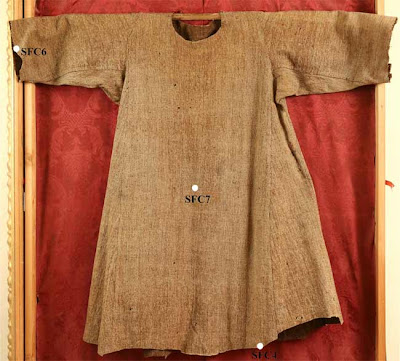 This tunic was once worn by St. Francis of Assisi
(Found in Cortona, Italy)
Once when Francis was returning from Siena, he met a poor man on the road, and said to his companion, 'We ought to return this cloak to the poor man, whose it is; for we have accepted it as a loan until we should find someone poorer than ourselves.' But knowing how badly the generous Francis needed it, his companion protested strongly that he should not neglect himself to provide for someone else. But the Saint said to him, 'I refuse to be a thief, for we should be guilty of theft is we refused to give it to one more poor than ourselves.' So the kindly Francis gave the cloak to the poor man.

Saint Francis of Assisi
Mirror of Perfection - 30
T
Posted by Chris Dickson, F.L.A. at 7:54 AM