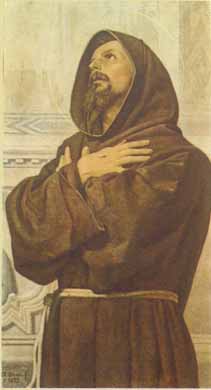 St. Francis always sought a hidden place where he could adapt not only his soul but also his members to God. When he suddenly felt himself visited by the Lord in public, lest he be without a cell he made a cell of his mantle. At times, when he did not have a mantle, he would cover his face with his sleeve so that he would not disclose the hidden manna. Always, he put something between himself and the bystander, lest they should become aware of the bridegroom's touch.
Saint Francis of Assisi
Celano, Second Life
CHAPTER LXI