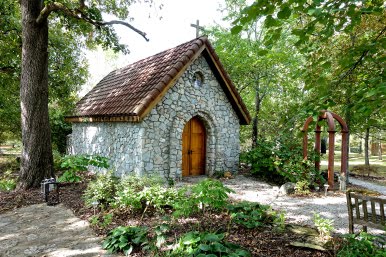 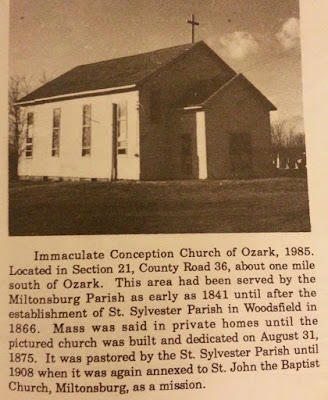 
"The Catholic Mission at Ozark in Monroe County, Ohio was organized around 1874 so that the people would not have to travel to Miltonsburg to attend Mass and receive the sacraments. George J. Burkhard, Anthony Burkhard, Adam Arnold, John Huth, and Rev. Edward Fladung, who was, pastor of the parish of St. John the Baptist, Miltonsburg, are remembered as the founders. Mr. Huth offered a piece of land near the public school for the church, but wanted: $200for it, whereas George Burkhard offered a small plot for free. The latter offer was accepted. John Adam Gertler, who owned the adjoining farm, donated an adjacent acre, the northern portion of the present site, on condition of being allowed to be buried there if he wished. The total site measures about 1.65 acres today. It is located can the west side of Monroe County Road 36, one mile south of the village of Ozark.
The two deeds by which the property was transferred to Bishop Rosecrans were signed on August 28, 1875. The church was dedicated on August 31, 1875. At that time, there were fourteen families and sixty-four souls in the mission.
About 1880 when Woodsfield first received resident pastors, Ozark became its mission. The priests came to Ozark on the narrow-guage Ohio River & Western Railroad, sometimes on a hand-car courtesy of the Catholic section boss. Rev. J. B. Weisinger in 1887 reported fifteen families there, for whom he offered Mass on any fifth Sunday of a month and on two holy days each year. Regarding the cemetery adjacent to the church, he said, "I suppose it is blessed."
Father Fladung also had a school built against the side of the church, where catechism classes were taught. Father John S. Cawley (pastor at Woodsfield from 1893 until 1902) has the school removed, remarking that they should not have "that corn shed" against the church.
In 1908 Ozark became once again a mission of Miltonsburg. The priests came on the second Saturday and fourth Sunday of each month. Rev. George F. Drescher, pastor from 1934 until 1945, began offering Mass every Sunday at Ozark, a practice which continued as late as 1976. In 1943 he wrote, "The priests have always liked the splendid people who live there, and these people have always been most faithful to their pastor." Just eleven families made up the entire congregation at that time.
The centennial observance of the mission was held on October 21, 1975, Most Rev. John King Mussio, Bishop of Steubenville, officiating at Pontifical Benediction. With the advent of good roads and automobile travel, it has become possible for the people to attend Mass every Sunday at Miltonsburg and the church at Ozark has been used but little in recent years.
The records of Immaculate Conception mission are kept at Miltonsburg by the pastor, Rev. Sam Saprano (Route 3, Woodsfield, Ohio 43793). The first burial was recorded in 1879, the first marriage in 1883, and the first baptism in 1905 (earlier baptisms were no doubt recorded in the register at Woodsfield St. Sylvester). The last record was a baptism performed on July 30, 1972, with later records made in the registers of Miltonsburg St. John the Baptist Parish. The church was torn down in 1989 by order of the Bishop of Steubenville. Bishop Daniel Conlon has given Christopher L. Dickson, Sr., (Great-Great Nephew of George C. Burkhard) permission to rebuild the little church on the condition that it be located on his family's property and not on Church property because of tax and liability considerations. It is to be called the Portiuncula (the "Little Portion") and will become the spiritual home of the Portiuncula Franciscan Hermitage and Retreat Center."

We are able to trace or Burkhart roots back to  John Sebastian Burkhart  1590 to 1654. Prior to 1590 a fire destroyed the Bruchweiler, Germany town hall, destroying all previous records.

And now we are ready to rebuild the church! 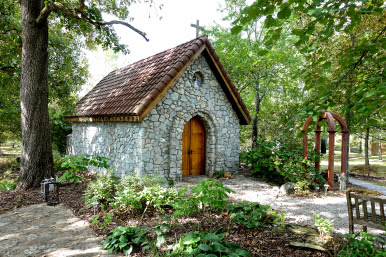 All people of faith in Monroe County, Ohio are being asked to drop off any excess cut sand stones they may have lying around their homes or farms. Simply drop them off in the field next to the Immaculate Cemetery in Ozark, Ohio on the side toward Woodsfield.

Thank you and God Bless!